What You Need to Know about the Measles Outbreak of 2019 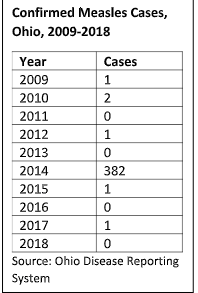 “Vaccinations save lives, period. I urge everyone who can, to get vaccinated,” said Director Acton. “Vaccination is the safest, most effective way to prevent serious vaccine-preventable diseases in children and adults, including measles.”

Measles is extremely contagious and can spread to others through coughing and sneezing. If one person has measles, up to 90% of those who come into contact with that person and who are not immune will also become infected. The measles virus can live for up to two hours in air where an infected person coughed or sneezed. If other people breathe the contaminated air or touch an infected surface and then touch their eyes, noses, or mouths, they can become infected. People infected with measles can spread it to others from four days before, through four days after, a rash appears.

Measles symptoms include a rash, high fever, runny nose, cough, loss of appetite and red, watery eyes. The rash usually lasts 5-6 days and begins at the hairline, moves to the face and upper neck, and proceeds down the body. Diarrhea and ear infections are common complications of measles. More severe complications may also occur.

Complications from measles are more common among children younger than 5 years of age, adults older than 20 years of age, pregnant women, and people with compromised immune systems.

As many as one out of every 20 children with measles gets pneumonia, the most common cause of death from measles in young children. About one child out of every 1,000 who get measles will develop encephalitis (swelling of the brain) that can lead to convulsions and can leave the child deaf or with an intellectual disability. One to three of every 1,000 children who become infected with measles will die from respiratory and neurologic complications

Measles may cause pregnant women who have not had the Measles, Mumps and Rubella (MMR) vaccine to give birth prematurely, or have a low-birth-weight baby

Vaccines stimulate the body’s own immune system to protect the person against specific diseases. Some serious and potentially life-threatening diseases that vaccines can help prevent include but are not limited to measles, mumps, rubella, whooping cough, chickenpox, tetanus, hepatitis A and B, and flu.

If you have any questions, please call the Ashland County Health Department’s Division of Nursing at 419-282-4357.